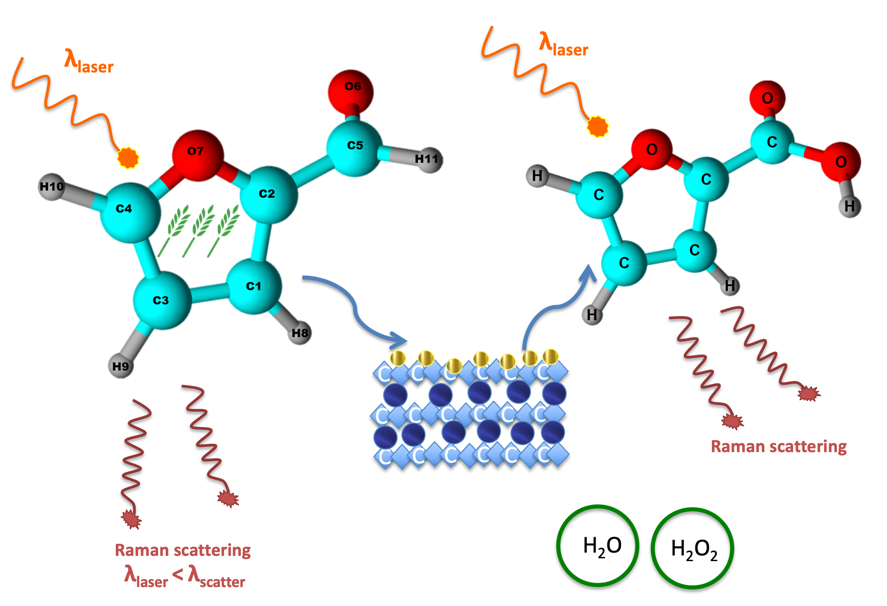 In this paper, Raman spectroscopy is used as a tool to study the mechanism of furfural oxidation using H2O2 as a reagent on gold nanoparticles (NPs) supported on hydrotalcites (HTs). This reaction was repeated, under the same conditions, but with different reaction times in a parallel multireactor system. The reaction media were analyzed using a macro device associated with a multipass cell permitting us to enhance the Raman signal by reflecting the laser beam 3 times. The Raman spectra showed the conversion of furfural to furoic acid without any chemical intermediates, thus privileging a direct pathway. Combining the results of the catalytic tests with those of the Raman study, the mechanism of furfural oxidation to furoic acid using gold NPs supported on HTs is proposed. The key points of this mechanism were found to be as follows: (i) the in situ formation of a base, originating from the Mg leaching from the HT support, initiates the oxidation of furfural by deprotonation; (ii) H2O2 used as a reagent in the solution increases the catalytic activity by its dissociation to form hydroxide ions; and (iii) the oxidation of furfural occurs on the surface of gold NPs and leads to higher furoic acid yield.